Hydrogen bonding with fluoride is a key interaction encountered when analyzing the mode of action of 5′-â€‹fluoro-â€‹5′-â€‹deoxyadenosine synthase, the only known enzyme capable of catalyzing the formation of a C-â€‹F bond from F–â€‹. Further understanding of the effect of hydrogen bonding on the structure and reactivity of complexed fluoride is therefore important for catalysis and numerous other applications, such as anion supramol. chem. Herein we disclose a detailed study examg. the structure of 18 novel urea-â€‹fluoride complexes in the solid state, by X-â€‹ray and neutron diffraction, and in soln. phase and explore the reactivity of these complexes as a fluoride source in SN2 chem. Exptl. data show that the structure, coordination strength, and reactivity of the urea-â€‹fluoride complexes are tunable by modifying substituents on the urea receptor. Hammett anal. of aryl groups on the urea indicates that fluoride binding is dependent on Ïƒp and Ïƒm parameters with stronger binding being obsd. for electron-â€‹deficient urea ligands. For the first time, defined urea-â€‹fluoride complexes are used as fluoride-â€‹binding reagents for the nucleophilic substitution of a model alkyl bromide. The reaction is slower in comparison with known alc.-â€‹fluoride complexes, but SN2 is largely favored over E2, at a ratio surpassing all hydrogen-â€‹bonded complexes documented in the literature for the model alkyl bromide employed. Increased second-â€‹order rate consts. at higher diln. support the hypothesis that the reactive species is a 1:1 urea-â€‹fluoride complex of type [UF]–â€‹ (U = urea) resulting from partial dissocn. of the parent compd. [U2F]â€‹–â€‹. The dissocn. processes can be quantified through a combination of UV and NMR assays, including DOSY and HOESY analyses that illuminate the complexation state and H-â€‹bonding in soln. 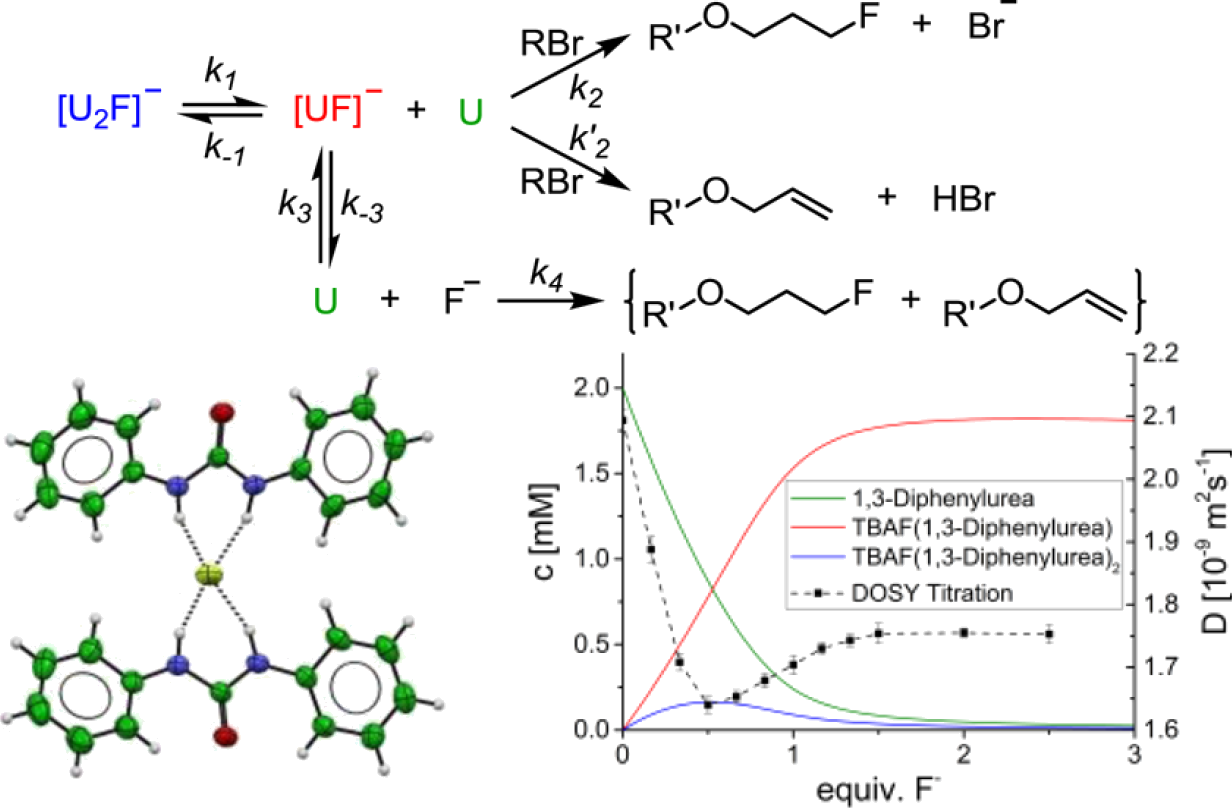 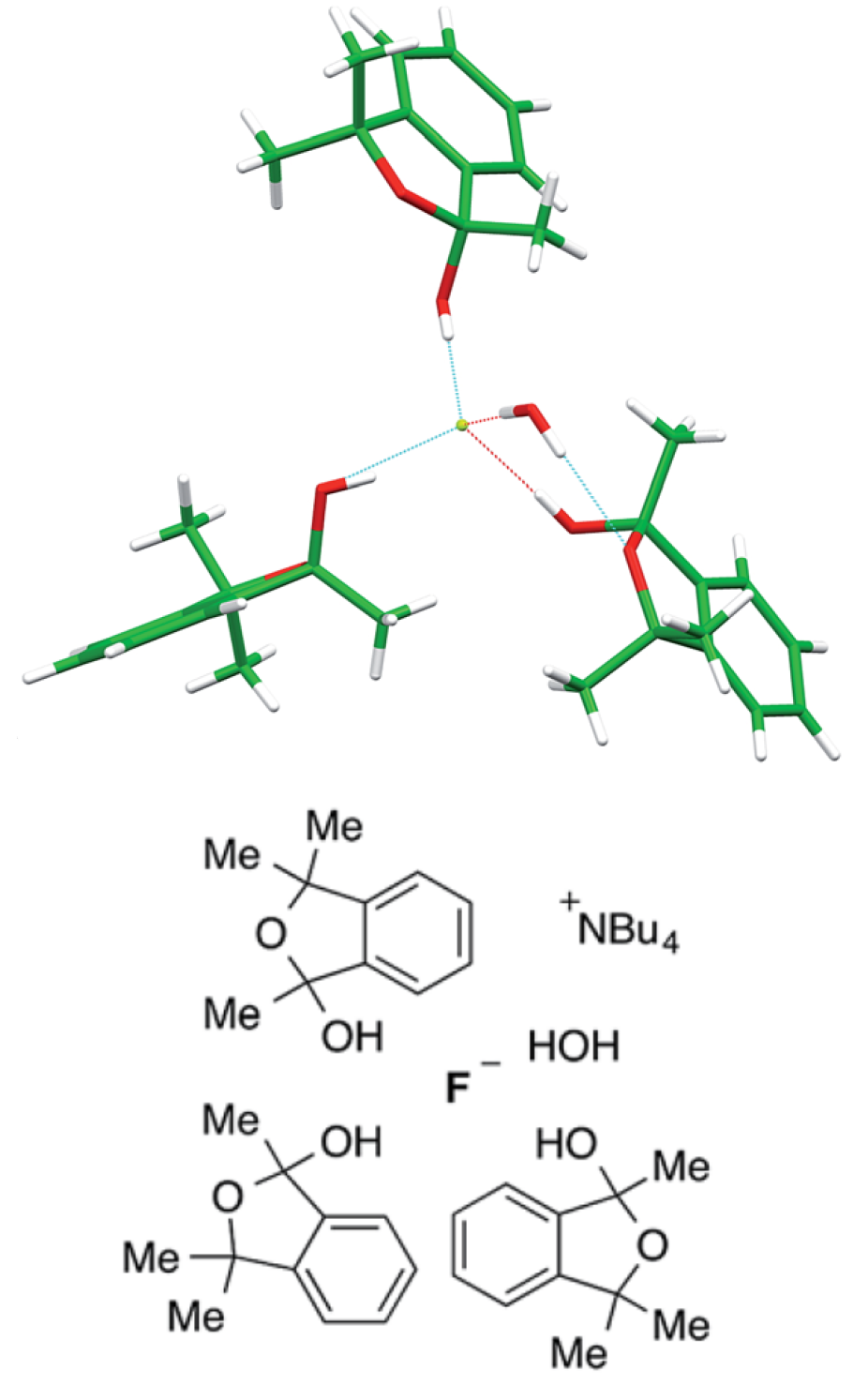 The nucleophilic reactivity of fluoride ion is altered in the presence of hydrogen-bond donors, including alcohols. Relatively little is known about the coordination involved; to rectify this, the X-ray structures of fourteen novel fluorideâ€“alcohol complexes with tetrabutylammonium as the counterion have been determined. The coordination number varies from two to four depending on the steric bulk of the alcohol and is closely linked to trends in reactivity. This diversity in coordination stoichiometry is unprecedented but significant, as it implies differences in the ability of the fluoride-alcohol complexes to dissociate in solution with release of a more active and/or selective fluoride source.

The third Red Kite Meeting was very well attended and comments from attendees indicated that it was very well received.Â  As well as Richard Cooper chairing the first session, contributions from Chem. Cryst. included posters from Will Brennan, George Pidgeon, Olivia Shehata, Karim Sutton and Jerome Wicker and a presentation from Kirsten Christensen on modulated molecular materials.Â  The esteemed poster judges picked George’s poster on hydrogen bonding in fluoride complexes as one of two joint prize-winning efforts thanks to the clarity of his presentation. 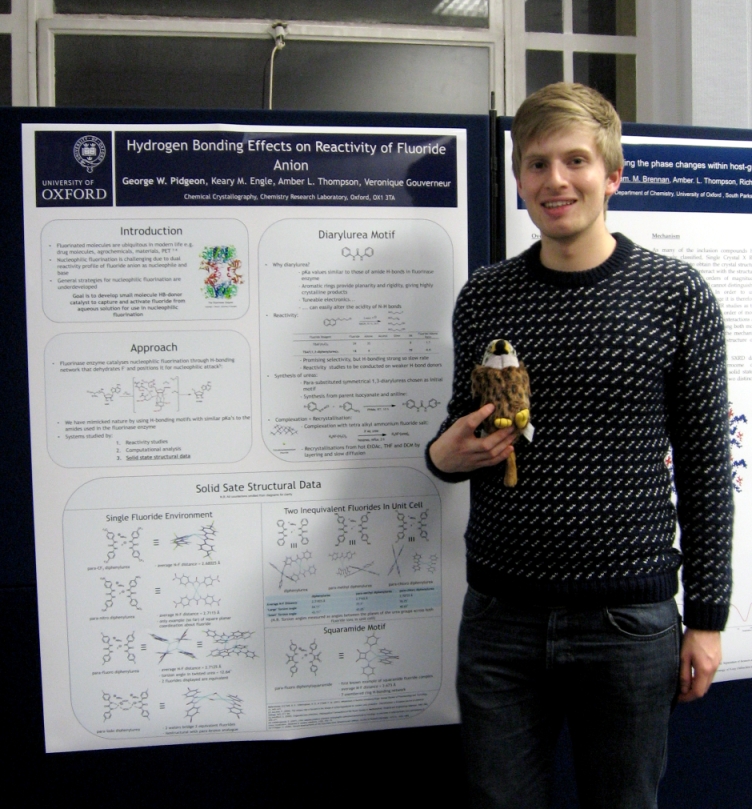 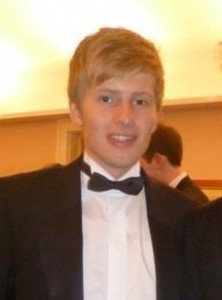 George is working on a collaborative project with Prof. VÃ©ronique Gouverneur’s Research Group to study the effect of hydrogen bonding on the nucleophilicity and basicity of tetra alkyl ammononium fluoride complexes.Â  When heâ€™s not praying for his products to crystallise, George spends his time running the Oxford University Darts Club and playing the trombone for the Oxford University jazz orchestra.